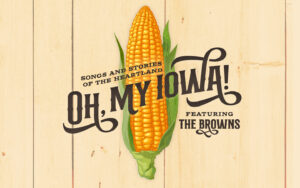 The Browns Century Music Theater presents, “Oh, My Iowa!” An original musical tribute to all things Iowa. The Browns bring to life the songs and stories of the heartland. You’ll hear highlights from hit Broadway musicals like, “The Music Man” and “State Fair”. Learn about the Iowa musical ties to such a great as Andy Williams, Antonin Dvořak, Glenn Miller Orchestra, and Al Jarreau. The Brown brothers will have you convinced you’re listening to Iowa‘s favorite 50s radio sensations the Everly Brothers as well as songs from Buddy Holly and Frank Sinatra. Listen to the stories behind songs like, “Church in the Wildwood” and their family harmony on “The Little Brown Church in the Vale” and “Brighten The Corner Where You Are”.  You’ll want to cheer for the rousing renditions of the “Iowa Corn Song” and “Sioux City Sue”.

How do all these songs have ties in the great corn state? Come find out all the answers as The  Browns share the stories and sing the songs of the heartland  in their production of, “Oh, My Iowa!”.